As a record-breaking named storm named Eta hoovered in the Gulf of Mexico near South Florida, the Spirit of VR Roadshow, a first-of-its-kind industry event, gathered in Panama City Beach. This would be the final area for the event, which had started in the Outer Banks of North Carolina. Not only had the hurricane season been unusually active, but COVID-19 cases were increasing and a major election had not gone the way most residents in the panhandle had hoped. Despite all these tensions, property managers were still willing to come out and meet, to talk about what challenges their guests were facing (and causing). 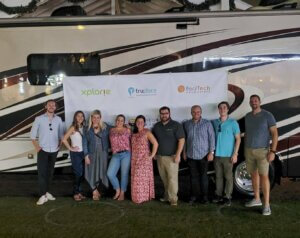 On Nov. 9, 2020, the Xplorie-driven van pulled into the waterfront venue of Papa Joe’s Bayside, which is now an outdoor event space that held nearly 500 people over the summer. With beach chairs, fire pits, food trucks and even a football goal post, the space felt tropical and relaxing. And relaxation was one thing vacation rental managers in this area were ready for. As of the event, most of them were still at 50% occupancy, and it wasn’t due the recent influx of IronMan participants. “That’s just how things have been going,” said one manager who has about 148 rentals. “We have not slowed down since Labor Day like usual.”

Nothing about 2020 will be referenced as “like usual.” The Sheraton in PCB was at 70% occupancy the first week of November, which has never happened in its 34-year history. One waitress at Sharky’s beachfront bar and grill, which boasts a large outdoor seating area where you can step on the sand from your table, ended the summer with more than $20,000 in tips.

Another rental manager said she had to go knock on doors of the FEMA trailers, which are still occupied with victims of Hurricane Michael, looking for cleaning crew help because she couldn’t turn over the units fast enough for new guests. Several crews working in the industry to clean vacation rentals had tripled their prices over the summer as well. Some property managers still recovering from Hurricane Sally received visits from event sponsor, Silicon, which helped them repair or replace damaged routers.

No Longer a Secret

What was once known as Florida’s best kept secret, the turquoise waters and white sand beaches off 30A became (and stayed) a respite for those who had been pent up for too long. Boasting a healthy mix of single family homes, townhomes and condos, the rentals near Miramar saw record-breaking numbers right up until Halloween. With no mask mandates and 100% capacity at restaurants, this location was just what drive-to guests were looking for.

The Grand Sandestin, a sprawling 2,400-acre resort town, where the last stop on the roadshow gathered to meet, welcomed several managers to enjoy Hammerheads Creole cooking, cold brews and a demonstration of Xplorie’s new Alexa-powered guest experience. The voice-powered program allows guests to ask Alexa for everything from the WiFi password to recommendations for local restaurants and entertainment. Event sponsor Brivo, formerly known as Parakeet, was also on hand to share ways their locking system can help in contactless ways. 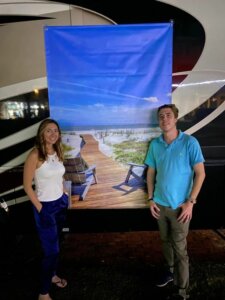 Standing outside that evening of the last stop in Destin, FL, one would hardly know there was a global pandemic occurring. People were calm walking around the outdoor shops and restaurants, enjoying the sunset from their balconies, and pushing strollers through the wide Baytown Wharf walkways.

Hearing from the vacation rental property managers in this area, it’s easy to understand how 2020 impacted each area very differently. These folks were thankful for how they had come through it, so far. And for those of us meeting with them face to face, we were grateful they were able to come out and chat for a few hours.

After all, hearing from Seashore Vacations that the manager, who also runs the front desk, has a layaway program and tells prospective guests he’s got properties for every budget: Chevy, GMC, and Cadillac, is just something that doesn’t translate well over Zoom.

There’s good news and bad news coming out of Myrtle Beach, SC heading into the fourth quarter of 2020. The bad news is that bookings since April never reached pre-pandemic levels. Even now, with many markets seeing an extended shoulder season, the streets are mostly empty along the Grand Strand. A few travelers taking a long weekend can be seen coming in and out of high rises along the coastline – a couple of which came all the way from Europe. For the most part, this market lost revenue when closures hit in March and never recovered it in the months following. 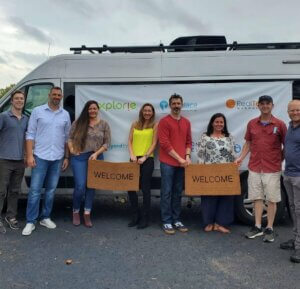 Myrtle Beach, SC is primarily a drive-to vacation rental market, which should have worked in its favor, as people stayed off airplanes for the majority of 2020. A couple of factors worked against this though.

While Myrtle Beach is considered a four-season market, it is not seeing the visitor traffic to its vacation rental websites, nor the advanced bookings it had last year. What property managers say they have their eyes on next is the upcoming election, as they expect the economy to move one way or the other based on its outcome.

Vacation rental companies here are toying with some lower than average rates for spring to entice visitors to return if conditions are conducive to do so. Brainstorming ideas in a vacuum is hard though and most of the contacts we spoke with had not been in contact with many of their peers.

Next top on the VR Roadshow is Panama City Beach, FL. Follow our journey on Facebook, or reach out to any participating sponsor for more information.

Special thanks to our sponsors Xplorie, Beyond Pricing, Brivo, RealTech, and Silicon Travel.